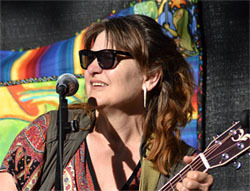 A Voice of Vision, Hope, Courage and Compassion

Her sound is pure Americana - an eclectic blend of retro-folk rock, Celtic mysticism, ribald country, soothing
reggae, and homegrown sass.  Her clear, expressive, soulful voice has been described as spellbinding.

A multi-instrumentalist, Leslie plays guitar and occasionally salts her show with fiddle and mandolin tunes. Her easy stage manner quickly engages audiences and fans describe her live shows as “captivating, fun and uplifting” – they often leave humming one of her tunes.

Leslie began her music career as a Rock 'n' Roll singer in 1972. Her passion for creativity has evolved through three original music CDs, as well as careers in radio, television, film making, advertising, and media production of all types.  One of her favorite projects was producing and hosting the original "unplugged" cable series “Northwest Tunesmith” that featured Northwest musicians.
Leslie is active in Folk Alliance International as Publicist for FAR-West Regional Conference.

"Very good job. I had no idea you were this good! So nice, really. Well produced and great songs!"  - Alice Stuart

"Her music has an ethereal retro 1960s folk sound and her voice sounds like a cross between the early Grace Slick and Loreena McKennit."  -Marty Reimer, Mountain Radio FM

"Kind of a retro-rock, folk and something else. A talent that's well worth watching."  - Victory Music Review

"The first time I heard her at the Victory Open Mic, I new I wanted her on my radio show." -Marianne Bundren, KBCS 91.3 FM