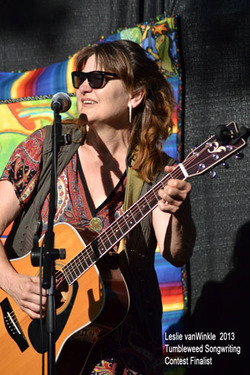 A Seattle native, Leslie vanWinkle is a musical storyteller.  Since strumming her first guitar as a teenager, she’s been writing songs with unexpected lyrics and sassy hooks. “I loved the swirl and swing of words as they’d weave through a melody, but I took chances. I guess I was alternative before it was a genre.”

Leslie studied violin and choral music from elementary school to graduation then launched her career as a vocalist and violinist with lounge and rock bands in the Northwest. She also worked as a model and actress. She performed at The Bathhouse in Seattle and played the female lead in “Vacation,” the winner of 1980 Bumbershoot Short Feature Film Festival.

Soon after, Leslie moved to Kona, Hawaii, where she continued to act on stage. After teaching herself bluegrass fiddle, she formed the 5-piece bluegrass band “Pele’s Pickers” and toured the islands. Pele’s Pickers was featured at the Grand Opening of the Aloha Theater on the Big Island.

After three years in paradise, Leslie returned to Seattle and worked her way through college as a freelance writer, Celtic fiddler and Rock ‘n’ Roll singer. She also worked as Assistant Manager and DJ at the U/W college radio station KCMU FM (now KEXP 90.3 FM).

She has produced three CDs of original songs. Her debut CD “When You’re Ready” tramples through love, loss and the end of innocence. Her second album "This End Up” celebrates courage and humor in the face of choices we make and prices we pay.  Her third CD “Face the Sun” (set doe 2014 release) treats being human as a voluntary assignment earning points in our spiritual evolution.